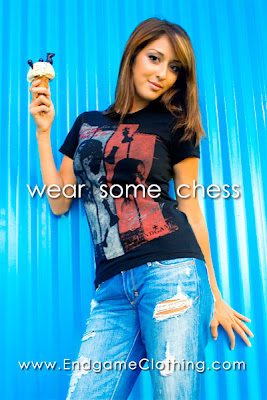 It's been a lot of work, but the new designs are now available at the main site.

Well...what are you waiting for? 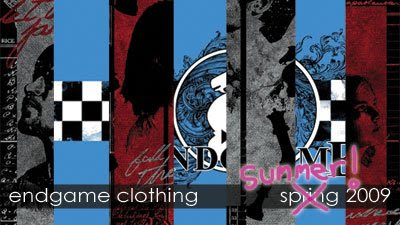 Well, summer is here and we almost have the spring shirts ready to go!! Best laid plans...

We have received a ton of emails asking when the new shirts are going to be released. We really appreciate how anxious everyone is, but we want to make sure everything is perfect.

We're not playing for a draw here, kids. The last piece of the puzzle is the photography. We want to make sure that every part of Endgame is the best we can do. Up to now I have been very proud of all aspects of Endgame...except the photography. Many of the photos on the site are just crappy shots I took with my cheapo camera. Some of them are just downright embarrassing. Well, that's all about to change!!

The photography with Jazmin, our female chess model, is finished and everything looks amazing. This afternoon, we are shooting our male model, Dan. So hopefully in a few more weeks, the photos will be edited and the site will be updated with the new chess t-shirts.

Hang in there, everyone...

In other news...Sean Trani filmed an interview with Grandmaster Var Akobian last month at the St. Louis Chess Club during the 2009 US Chess Championship. About halfway through the interview, Var has some very nice words to say about Endgame. Thanks, Var!!