Life in the Lower Section 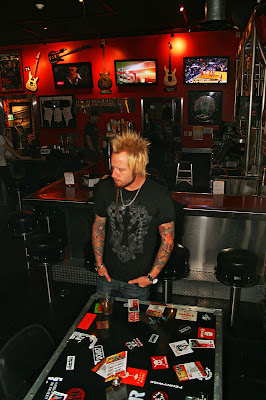 A customer of Endgame Clothing sent me the following quote...

"If alterna-rock were a chess game, Lit would control the all-important mid-board squares, where the diagonals of cutting force intersect with the horizontals and verticals of straightforward pop-melodic appeal."

Talk about an amazing coincidence! This is from an article written in the LA Times back in 1999. Fast forward 10 years and a few million albums later and the guitar player, Jeremy Popoff, is wearing one Endgame's chess t-shirts. Awesome!!

By the way, if you do not own Lit's "A Place in the Sun," you have to get it. It is simply one of the best pop/punk albums ever.

The full article with the above quote can be found here.

What Does This Have To Do With Chess T-Shirts?

I came across this video a while back and I find myself watching it over and over again. There is just something magical and beautiful about it...

So what does this have to do with chess t-shirts? Well...nothing, really.

Chess and Other Boring Things on TV

Poker is boring. Golf is boring. Billiards is boring. They are all so boring that each of them is usually accompanied by massive amounts of drinking. But they are also all on TV. Take a gander on ESPN2 on a Sunday afternoon and you will see nothing but boring sports. Billiards, golf, poker, spelling bees, scrabble and sandcastle building. Seriously? Sandcastle building? And did I mention that cooking has an entire channel?

Now I'm not here to pick on anyone, (well, maybe the scrabble people, I mean they're just so smug with their big vocabularies) but instead I want to spotlight what these other "boring" sports are doing right and what chess can learn from it.

When we're watching golf and the camera just happens to cut away to some guy in 19th place, we know he is going to make a spectacular shot. Go spend some time in a poker room and tell me that's not one of the most boring places on the planet. But when we watch on TV, every hand is pure excitement.

We're not talking about rocket science here...with chess you would film hours of play, do massive post-editing to just show the critical moves and put in some decent commentary. With the help of computer analysis, you can explain to the casual player or layperson what the best move is and illustrate it on-screen with some snazzy computer graphics. Flesh out the players with some filmed interviews and narratives with compelling back-stories. And, of course, some hot chick to conduct post game interviews.

People don't watch TV to see games, they watch to see human drama and joy. By itself, does it really matter if someone sinks a 20 foot putt or catches a spade on the river? No! But what I find engrossing is the passion and dedication it took to be able to sink a 20 foot putt. And I love to see the child-like excitement when someone catches a spade on the river to complete a flush. I want to see the victory and defeat, the journey, the competition, the stakes and the winnings!!

Do I really give a shit if a kid knows how to spell "alopecoid?" Hell, no! I just want to see something like this:

Good stuff. Human stuff. Ridiculous stuff. And is there anything more ridiculously human than sitting for hours, deciding which little piece to move on a board?

Speaking of photos...what do we have here? 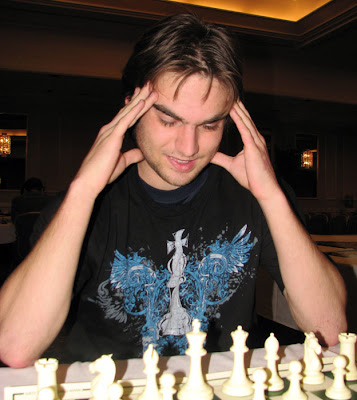 It looks like IM Sam Shankland sporting the Wandering King! Thanks for the support, Sam!


Mary Chapin Carpenter - Read To Your Bunny by CyberVFox
Posted by X at 7:12 AM No comments: