Are you tired of hiding the fact that you play chess? Do you want to see your local Grandmaster quit his night job at McDonalds? Do you want to finally get the respect and admiration you deserve for spending years of your life staring at little wooden pieces?

In order for any of these things to happen, we must make chess more popular. And I am here to say that this is actually much easier than most people think. People have said for too long that chess will never achieve mainstream success. But in reality, an activity is irrelevant to its popularity. The largest determinant to whether something is popular or not is its promotion. And the promotion of chess in this country sucks.

Sure, we have problems with the federation that is technically in charge of promoting chess in this country, but that is not the biggest problem. The biggest problem, as I see it, is the lack of the human element. We tend to forget that 2 people are playing the game. These people have stories and personalities, but we never get to hear them.

The most horendous example of this problem is the Computer vs. Computer matches! Is there anything more boring and damaging to the image of chess than that? Are we suppose to revel in the glory of the computers' perfect play? Who gives a shit about perfect play!? That's like going to the movies to watch a film about a perfect life. BORING! Show me some guy who's life is fucked up and tell me how he overcomes it...that's what I want to see. That's what makes me cheer, laugh and cry.

To promote chess, we must make chess more human. So how do we do this?

1. The Internet. This has been a huge windfall for chess and chess communication. Chess blogs are all over the place (don't look now, but you're reading one) and online play has created millions of closet chess players. The best example of this is the one-stop, chess playing, social networking masterpiece called Chess.com. Anyone can play as well as connect with other chess players and truly feel like part of an online communty.

2. Focus on Character. Every person has a story. And the story of chess players in an amazing one. The incredible personal sacrifice to a game that never promises to give back as much as you put in? These people are not lured by flashy cars and supermodels. They are not leaving high school to go pro. They are sacrificing everything to play a game with little financial reward or prestige. Many get to the end of the road, and like a bitter drunk staring at a bottle, wish they had never seen a chessboard. Or others come from far away countries, dodging and weaving through years of beauracracy and political instability just to find a home. I don't give a shit about the tournament where they achieved their second GM norm, give me the stories of thier lives!!!!

3. Away from the Board Promotion. Chess is a very intimitating game for those who don't know how to play and can be downright cruel to those who do. And while the pieces may be beautiful, they aren't too cuddly. We need something softer, like....t-shirts!! Oh snap!!! See what I did there? I brought it back around to Endgame Clothing, The Original Chess Apparel. Apparel has been a standard for promoting activies for years. There are millions of people who wear Quiksilver or TapouT without every stepping foot into the ocean or an octogon. But people buy and wear the t-shirts because they support what the sport represents. Endgame Clothing t-shirts are an off-board expression of the love of chess. 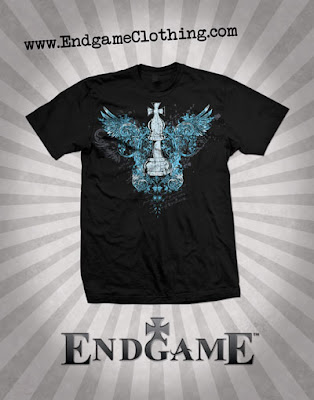 My parents have never played poker. But my parents love watching poker on TV and they know all the players' names. They know who is nice and who is a jerk. Poker has done something very, very, right. They focus on the drama of the players, not the game.

"Hey, Mom, do you know any names living chess players?"

"Actually, he died a while back." 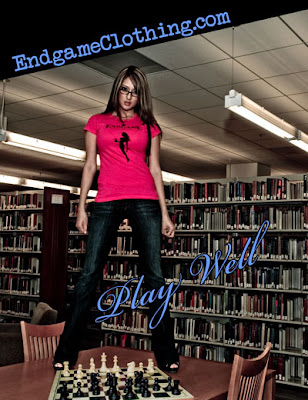 Hey Everyone! Endgame Clothing will be taking the traveling t-shirt circus on the road to the Las Vegas International Chess Festival which runs from June 4 -7. The tournament will be taking place at the South Point resort. If you are in town, be sure to stop by and say, "Hi!"
Posted by X at 8:04 AM 5 comments:

Over the weekend, IM Sam Shankland won the semi-finals and finals of the US State Champion of Champions tournament which qualifies him to play in the 2009 US Chess Championship. Congrats!!

The US Chess Championship will take place in May in St. Louis...
Posted by X at 8:20 AM No comments: