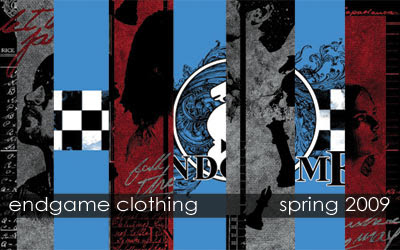 Both of these designs will be available at the Las Vegas International Chess Festival being held at the South Point Hotel and Spa on June 4th through 7th. They will be available on the Endgame Clothing website shortly thereafter.

We truly appreciate all of the support everyone has given Endgame and we will always do our best to provide players with a unique way to support chess...both at the board and away from the board.

Also, if you haven't done so already, be sure to sign up for our newsletter to receive coupon codes good for discounts on the new shirts.
Posted by John aka Endgame Clothing at 9:56 AM 2 comments:

Chess has been featured in an insane number of films. In case you missed them, here are a few highlights: 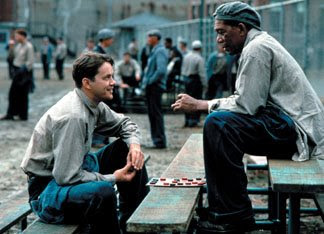 There is nothing worse than being convicted of a crime you didn't commit...just ask Andy Dufresne...or the A-Team. While serving a life sentence in prison, Andy decides to make his own chess set from the rocks found near the prison grounds. Andy describes chess as being "civilized" and "strategic." We don't get to see a whole lot of chess being played, but we know that chess is a pastime that Andy values greatly. What we learn from this movie: The same tactics that help you from being mated on the chessboard can't always help you from being sodomized in the prison showers. 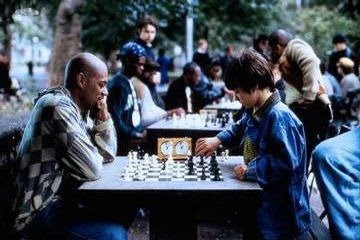 Every sport has a crowning cinematic masterpiece. Boxing has "Raging Bull," baseball has "The Natural" and ping-pong has "Balls of Fury." Few would argue that there is a better chess movie than "Searching for Bobby Fischer." This is a great movie with a legit all-star cast. The movie centers around the idea that chess is a game that has been drifting around in the doldrums since losing its greatest player. When an 8 year old prodigy appears to be the next incarnation of the fallen hero, the entire chess community pins its hopes that this child can save a once proud country of chess players. Little known fact: After seeing Lawerence Fishburne's performance in this film, the Wachowski Brothers wrote and directed a complete rip-off of "Searching for Bobby Fischer" and called it "The Matrix." In this pathetic imitation, we have nearly the same plot: The very future of a group (chessplayers) hinges on finding the identity of The One (Fischer). The One is supposedly a predestined person who is capable of seeing the secrets of all of life as we know it (chess). 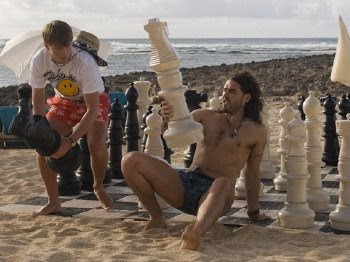 In this film, we can't help but fall in love with two unlikely friends in the form of a Rockstar and an Accountant. In one particularly emotional scene, we come across the sexually inexperienced Accountant, on his honeymoon, confused with his new role as a husband and struggling with his very faith in God. As he desperately tries to understand God's reason for putting a playground next to a sewer system, he finds solace with the Rockstar. Through the creative use of an oversized chess set as a marital aid, the Rockstar is able to show the Accountant the beauty of the sexual act as well as finding a level of intimacy with his new bride that he never thought possible. Movie Life Lesson: We all can learn something from each other. As the Rockstar provides the benefit of his vast coital experience to the Accountant, we hope that in turn, the Accountant can lend his financial expertise to help prevent the Rockstar from becoming a cautionary tale on VH1's "Behind the Music."
Posted by John aka Endgame Clothing at 7:35 PM 4 comments: